Written by Emily on April 14

Captain America: Civil War is featured on this week’s cover of Entertainment Weekly. You can check out the cover that features Chris in our gallery along with two new production stills that have been released! High quality scans will be added to the gallery tomorrow! 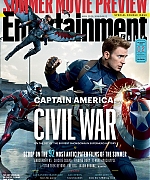 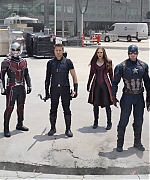 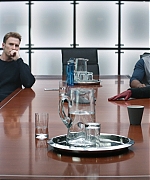 The heroes of Captain America: Civil War are doing what most burned-out, overworked professionals do when faced with unrelenting crisis: They’re turning on each other. This year’s Summer Movie Preview from Entertainment Weekly splashes the battle across four separate covers, with exclusive new photos and details showing how Marvel Studios pulled off its story of hero vs. hero.

“This is an argument and a struggle with your family, for your family, and against your family,” says Chris Evans, who has now played the super-soldier Steve Rogers in six Marvel films (counting a cameo in Thor: The Dark World.) Normal people may not settle their quarrels by hurling each other through walls, but the actor says the emotional deathmatch in Civil War is just an exaggerated version of an ultra-tense holiday dinner. “I think it’s much more relatable, much more akin to [disputes] we have in life,” Evans says. “Arguments with your family can be far worse than struggles with your enemy.”

Entertainment Weekly spoke with Evans alongside Marvel Studios president Kevin Feige, the mastermind behind the interlocked movie franchise, and directors Joe and Anthony Russo, returning after Captain America: The Winter Soldier. The four men met inside the Marvel headquarters conference room where they broke the story for Civil War, sliding photos of the characters across the table as they separated #TeamCap from #TeamIronMan.

They also tell the story of adding the historic first black superhero, Black Panther, to the universe, and bringing Spider-Man home from his own cinematic galaxy over at Sony Pictures.

It’s no accident that the next four movies in the Marvel Studios line-up – Doctor Strange, Guardians of the Galaxy, Vol. 2, Thor: Ragnarok – involve characters who are not in the core fight of Civil War. “That’s somewhat intentional to go and explore the other aspects,” Feig says. This movie will leave things broken for a while, at least until 2018’s Avengers: Infinity War – Part One, which the Russos are also directing.

We also break down exactly why the main characters choose their sides. No punches are pulled in Civil War. There are plenty of Marvel Studios movies in the pipeline, but the scars of this one are going to last.