Written by Emily on September 12

Chris Evans is featured on the cover of the October issue of W Magazine for The New Royals along with a few other celebs. You can check out the cover along with two outtakes in the gallery. A short video below and his interview can be read below! 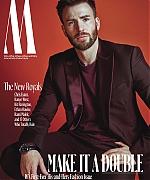 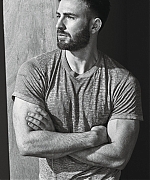 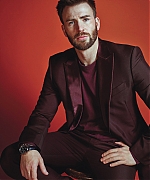 W MAGAZINE – Chris Evans’ start in Hollywood wasn’t so auspicious. From his infamous scene in Not Another Teen Movie to playing “Harvard Hottie” in The Nanny Diaries, starring his future co-star Scarlett Johansson, he’s enjoyed a slow burn rise to the top. “I’m glad that I didn’t you know come out of the gates with the first thing being some huge critically-acclaimed success. It’s been very nice and educational,” he says. For the past five years, he’s been known to us as Captain America, one of the most classic roles in the Marvel universe, which is why it made sense to pair him with a new arrival to the superhero genre, Chiwetel Ejiofor, in our annuals Royals package. Here, he talks about his rise in Hollywood, from the his very first part in high school to his roles in the cult-favorite Snowpiercer and the upcoming Gifted.

Tell me the first thing you ever auditioned for. How old were you? I must have been 12 or something. Maybe my first audition ever was a school play, a play called Crazy Camp. And it was in sixth grade. And, well, I didn’t get the lead; I played the supporting lead, which was just as good. I ended up dating one of the more popular girls as a result, and then the second the play was over, she dumped me. And I learned then the power of getting a good role.

And did you get the bug as well, aside from the girl? I did. It was a lot of fun. It was something that I took to it very easily. It just felt very comfortable, very natural. My older sister did it, so seeing her do it, and anything she did, we wanted to copy. So it just felt natural, and there was a bunch of local community theaters so I just started doing plays year-round. At that point it was still a hobby. I still kind of had my sights set on being an artist. I was big into drawing, painting. I really liked animation. You know part of me kind of wanted to work for Disney or Pixar. Well I guess Pixar really hadn’t been flushed out at the time. You know I remember when Beauty and the Beast came out in theaters, it was the first time they had started to incorporate computers, and it was just a really cool thing, and I remember thinking ‘I’ll never not like cartoons’ [laughs], and this is just a great format for really unique storytelling. And I loved Fantasia. And so at the time it was much more about art. Then at some point in high school, it started to become a little more focused on acting, and by senior year I had committed. That’s the good thing about doing community theater. The ratio of guy to girl is drastically imbalanced, so you have a much greater chance of getting a good part.