Written by Emily on April 07

Chris Evans on His New Show ‘Defending Jacob’, Little Shop of Horrors, and His Family 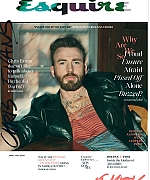 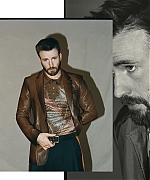 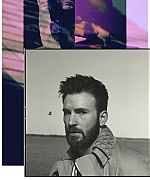 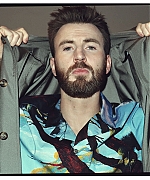 ESQUIRE – The artist formerly known as Captain America is found in seclusion at his rambling farmhouse, set back from the road on a couple of sylvan acres in the Boston suburbs, not far from his childhood home. It’s a warm, late-winter afternoon. The trees are bare. The sky is clear. Patches of melting snow cover the ground.

With his fortieth birthday on the horizon, Chris Evans seems to have undertaken a retreat, returning to familiar ground to regroup. The Marvel Cinematic Universe now behind him, the actor has the time, money, and wherewithal to pursue anything he wants.

All he has to do is figure out what.

Evans is sitting in an armchair by an unlit fireplace in an area off the kitchen, an informal sort of room you might call a den. The furnishings appear to be mid-century modern, a style often seen in Los Angeles, where he has a house in the Hollywood Hills. Evans is welcoming but not warm, broish in a manner that bespeaks form over content. In person he seems very much like the guy onscreen; his upper torso is sculpted in a way that suggests he’s still wearing his Avengers uniform under his green tartan flannel shirt. His ball cap has a shamrock on the front panel.

Evans’s mutt is snoozing at my feet, letting out the occasional fart. His name is Dodger, after Evans’s favorite character in the Disney movie Oliver & Company—the roguish mongrel who leads Fagin’s gang of orphans. The pair met in 2016 at a Savannah rescue shelter where Evans was filming a scene for the feel-good movie Gifted.

You would never know it from the spotless condition of the premises, but last night Evans hosted friends for karaoke. I ask him his favorite song choice. “You can’t go wrong with Billy Joel,” he says. (Coincidentally, it was Joel who voiced Dodger in the animated film.) His lifelong crew includes a cardiologist, an engineer, a computer guy. Like Evans, they’ve made good but stuck around, rooted in their home soil, die-hard fans of the Red Sox, and the changing seasons.

Evans’s latest acting project, Defending Jacob, is about to debut on Apple TV+. On the show, he plays an assistant district attorney in a small town who finds himself torn between his professional responsibilities and his love for his teenage son, who has been accused of a gruesome murder. As the episodes proceed, Evans’s character confronts his own secret past.

The limited series was shot in the Boston suburbs. “It felt like I had a regular nine-to-five job,” he says. “I’d sleep in my own bed; I’d see my family on weekends. A lot of times you have a bit of a nomadic lifestyle as an actor. You live out of suitcases and in cities you’re not familiar with. Doing Jacob made me feel like I was home but still doing what I love. It was incredibly comforting.” His real estate holdings notwithstanding, he considers this his home. He spends a lot of time with his brother, the actor Scott Evans (One Life to Live, Grace & Frankie); his younger sister, Shanna; and his older sister, Carly, and her children. He often calls his mom, Lisa, ten minutes before dinner to tell her he’s coming over to eat.