Written by Emily on May 07

Chris Evans on How He Chooses Roles: “I Try Not to Do Anything Based on What Other People Think of Me” 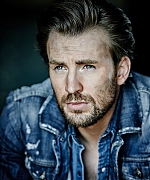 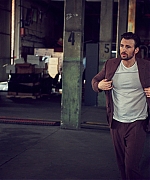 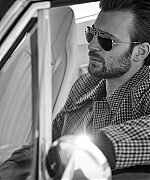 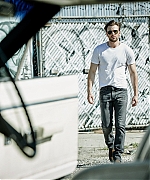 INSTYLE.COM – So this is a fashion story, huh?” asks Chris Evans, as he lies back on his sofa and kicks his red Timberland Earthkeepers onto the wooden coffee table in his Los Angeles home. “Well, it may be my last one. If I were the only man left on this earth, I’d be wearing sweatpants every day for the rest of my life.” The 34-year-old Boston native may not be a sartorial savant, but just a week before this interview, the scruffy Captain America stud attended the Academy Awards was looking dapper in a simple black Prada tuxedo, bow tie, and slicked-back hair.

“It was an out-of-body experience,” he says. “I grew up watching the Oscars, so being there makes me appreciate how far I’ve come.” In the early ’90s, Evans started his career as one of the dreamy guys you could romance in the board game Mystery Date. He went on an open casting call and booked the “role” of Tyler. Fast forward 20 years and the actor is headlining two major new movies: the third installment of his blockbuster Marvel series Captain America: Civil War, in theaters now, and the Marc Webb–directed family drama Gifted. The latter is a departure from his superhero filmography, but Evans, who says he practiced Buddhism since his early 20s, believes in taking on projects he connects with. “I want everything I do to come from a pure place so that I don’t become soured by the experience. I just like things to be easy in my everyday life,” he admits. “I don’t even like shaving.”

Clearly, you’re not a huge fashion guy. How would you describe your approach to style?
I try to be simple, classic, and clean. I don’t like my jeans to be too frilly, so I go with basic Levi’s and a fitted white T-shirt. I appreciate a retro vibe—a nice James Dean or Paul Newman look. It takes me about two minutes to get dressed, but then I’ll get photographed sometimes and think, Oh, s—. I look like a bum.

Do you ever accessorize?
I always prioritize function. I like Barton Perreira sunglasses because I have very weak eyes, so I’m always squinting—there you go, that’s fashiony! You can’t really go wrong with Ray-Bans either. If I’m going to get all dressed up and go to the nines, an IWC watch is nice.

How about shoes?
My favorite article of clothing is a good pair of sneakers. Solid footwear makes me feel more secure, athletic, and mobile. I’m not into labels, so I don’t care what kind of sneakers they are, as long as they’re comfortable and the laces tie. I’m not the barefoot type of guy.

So it’s safe to say you prefer to be fully clothed too?
Yes. I’m definitely not a walk-around-naked person.

Do you think guys have it easier on the red carpet?
Absolutely. More often than not, women are judged more harshly on what they’re wearing in photos. Most women I know say that they get dressed up for other women. I don’t see a bunch of guys sitting around asking, “What is he wearing?” For women it’s got to be a lot of pressure when they’re dressing for events.

Ever had a mishap of your own when you’ve borrowed designer clothes?
Let’s just say that if I’m wearing high-end pieces, I’m probably going to an event, which means I’m going to have a few drinks. I’ve certainly woken up with a few mystery stains on the previous night’s suit.

You’ve recently been out promoting Captain America: Civil War. How is this film different from the others?
The directors, the Russo brothers, have a way of making it feel extremely relatable and real amid flashes of superhero fanfare. When I first got the offer to be a part of this franchise, the thought of a multi-picture contract that could last eight years of my life was stressful and scary. But doing these movies was the best decision of my life.

You also star in the upcoming Gifted, which deals with a man battling with his mother over custody of his niece. Was it a challenge getting into character?
No, I found it to be really relatable. Every family has issues—my own parents are not together. I was 18 and out of the house when it happened, so I had the good years.

Did you feel like you had something to prove by taking on a more dramatic role?
I try not to do anything based on what other people think of me. I think most actors get into the industry because it’s fun and gives them joy. But along the way, your joy and hobby become your job. When it becomes your job, it gets infused with a sense of fear. Doing something to prove yourself is fear-based. I don’t think it’s a healthy way to work or to live your life.

Has Hollywood changed you over the years?
I can’t deny that it’s had an effect, but I think it’s a positive one. Instead of trying to figure out how to play the game, I’ve come to realize that it’s more important to remind myself that I don’t have to win today and I don’t actually have to play at all. Obstacles and hurdles are man-made. I won’t say it’s not useful to self-reflect, but I realize the part of you that’s fueling the self-reflections actually more akin to your ego than to the situation you’re in.

What’s your perception of yourself right now?
Curious, passionate, loyal, direct, honest, and over-analytical to a fault. I feel a lot of goodness, joy, and happiness. Until I don’t find that anymore, I’m going to keep doing what I’m doing.