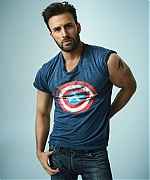 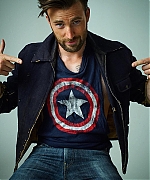 ROLLING STONES – There are black helicopters buzzing over Hollywood Boulevard. The LAPD has shut down traffic in both directions. Thousands of civilians are amassed on the sidewalk. If this were a comic- book movie, now would be the time when the sky opens up and the alien mothership comes swooping in, space guns blazing. But because it’s just the premiere of a comic-book movie – Marvel’s Captain America: Civil War, opening this month – all the hubbub merely presages the arrival of the man of the hour, the leader of the Avengers, Cap himself: 34-year-old Chris Evans, flashing an action figure smile as he steps out of a blue Audi sports car and onto the red carpet.

The sports car was not Evans’ idea. Audi is a big sponsor of Captain America: Civil War, and the product placement apparently extends to the premiere, where he and his co-star/antagonist in the film, Robert Downey Jr., have been asked to arrive in matching Audi R8s – red for Downey’s Iron Man, blue for Evans’ Cap. Up until then, Evans was having a stress-free evening, pre-partying at his home in the Hollywood Hills with his mom and brother and some buddies from back home in Boston, getting loose before his big night. But when he got to the theater and had to do the car thing – that’s when the anxiety kicked in.

“It’s a little nerve-racking,” Evans says two days later. “You’re in the SUV with your family, your people. And then you have to pull over in some weird parking lot and do the swap. There’s security and all these people. All of a sudden you’re out of your comfort zone. It’s strange. The little things that can tip you over.”

“It’s funny,” says Scarlett Johansson, a frequent Captain America and Avengers co-star who’s known Evans since she was 17. “He’s extremely easygoing, he loves to hang out, he loves to be around people. But whenever we do a premiere, or he has to be in the fray in some work-related context, he’s terrified.” Downey told something similar to Jimmy Kimmel the night after the premiere: “Chris Evans is such a nervous Nellie,” he said. “We’re supposed to drive in in the Audis, and he’s like, ‘Bro, I don’t know – should you go first, or I should go first?’ I was like, ‘Man up, dude!'” (Later, to Rolling Stone, he also says Evans had to excuse himself for a cigarette.)

You’d think this stuff would be easy for Evans by now. He’s one of the biggest names in the Marvel Cinematic Universe, the sprawling, $8 billion Disney-owned enterprise that includes his three Captain America films; the Iron Man, Thor and Hulk franchises; and the all-star Avengers team-ups, two of the top-grossing movies of all time. Shouldn’t he be comfortable with a few cameras and fans? But to hear Evans tell it, he’s one of the least-comfortable movie stars around. The acting part is fine; it’s everything else he can’t handle.

Read the rest at the source