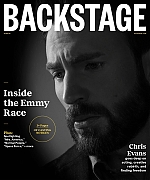 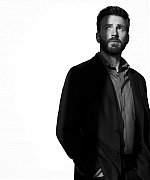 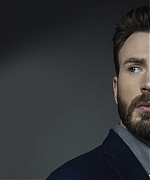 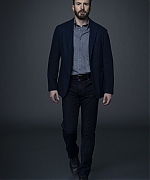 Before Chris Evans became Chris Evans, superhero and superstar, he made a habit of asking scene partners the question every starry-eyed artist wants to ask: “What’s your process?”

“I’ve met some actors who are wildly self-aware, wildly self-possessed, incredibly intelligent people,” he says. “I’ve also met actors who have no idea what’s going on around them at any given moment. And both can turn in phenomenal performances. It really begs the question: What is going on in your head when you see a piece of paper with a bunch of words?”

Somewhere on the journey from acting in school plays just outside Boston to a blockbuster career in indie flicks, on Broadway, and almost a dozen appearances in the Marvel Cinematic Universe as Captain America, and on to his recent impressive turn on the Apple TV+ limited series “Defending Jacob,” Evans stopped asking the question—but not because he’d settled on an answer.

“The only conclusion I can draw is that there is no formula,” he says. “I think it’s meant to be in a constant state of rebirth. It’s this organic, living thing that you have to re-examine with every character.

“Sorry if that made me sound pretentious; I’m hearing myself right now,” he adds with a groan.

Evans is too articulate about his 20-year love affair with acting and, frankly, too charming to ever come off as pretentious. In his conversation with Backstage, conducted remotely from his home in Los Angeles, he overflows with practical advice for his peers and fellow students of the craft.

Actors at the beginning of their careers could take a leaf out of Evans’ book: During the summer before his senior year of high school, he wrote to New York City casting offices about interning. “I figured I should probably have a job that brought me into contact with agents,” he remembers. While he was assisting with casting bit parts on the Michael J. Fox sitcom “Spin City,” he ended up “talking to agents every day and keeping a little book of the agents who were nice.” He then asked to read monologues for the agent who, after Evans finished school early to audition for pilot season, got him a role on 2000’s short-lived Fox comedy “Opposite Sex”—plus plenty of other auditions he did not book.

“Oh, god,” he says when the subject of auditioning comes up. “Ninety-five percent of the work is rejection. Those first 10 years, you’ve got to put the gloves on for every job and you’ve got to get in the ring.” For the first half of his career, Evans emerged from most auditions convinced he not only wasn’t getting the part, but that he wasn’t getting any part ever again. “When all you hear in your head is that high-pitched buzzing sound and your palms are sweating and you feel like you can’t catch your breath,” he deadpans, “that’s the opposite of trying to drop into a moment.”