Plot:
A handful of heroes become superheroes under unlikely circumstances in this action drama adapted from the long-running Marvel comic-book series. Four astronauts are on a mission aboard a new experimental spacecraft when they are unexpectedly exposed to a massive dose of gamma rays. The accident causes strange and unexpected transformations in all four. Reed Richards (Ioan Gruffudd), top scientist and leader of the mission, can now stretch his body like elastic and is dubbed Mr. Fantastic. His partner and sweetheart, Sue Storm (Jessica Alba), develops the ability to become invisible at will, and becomes known as The Invisible Girl. Her younger brother, Johnny Storm (Chris Evans), is renamed The Human Torch for his new talent of being able to summon up fire from his body when he chooses. And Ben Grimm (Michael Chiklis), pilot for the journey, mutates into a monstrous creature with superhuman strength and muscles like stone, known as The Thing. Together, the travelers become known as the Fantastic Four, and they set out to use their unusual skills to fight crime, quickly gaining a nemesis in another altered hero who uses his talents for evil, Doctor Doom (Julian McMahon). A long-gestating project that had been talked about by a number of filmmakers since the early ’90s, Fantastic Four was previously the basis for a pair of animated television serials, and was made into a feature film in 1994 by producer Roger Corman, though that film was never officially released. (Fantastic Four creator Stan Lee has said the 1994 film was made only so that the producers could hold on to the rights to the characters, and that it was never intended to be distributed to the public.) 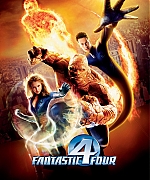 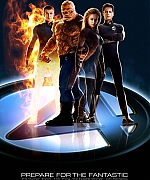 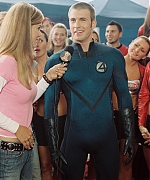 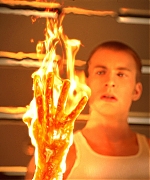