Chris was on Jimmy Kimmel Live last night with his Civil War co-stars, Anthony Mackie, Sebastian Stan, and Paul Rudd. You can check out high quality photos from Chris’ appearance in the gallery, thanks to my friend Jasper and check out clips from the interview below! 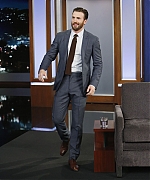 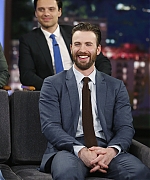 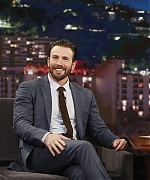 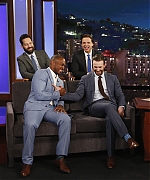 END_OF_DOCUMENT_TOKEN_TO_BE_REPLACED

Interviews with E! Live from the Red Carpet

extratv – Over the weekend, Chris Evans sat down with “Extra’s” Renee Bargh at a “Captain America: Civil War” press junket, where he opened up about his recent confession on Anna Faris’ podcast.

In the podcast, Chris was asked if he would like someone to send him a selfie of their breasts or butt. He responded, “I’m way, way, way more of an ass man.”

His confession made headlines, but is he getting more belfies from girls now? He told Renee, “No, no, no — wouldn’t that be funny if that was the plan the whole time?” He joked, “I’ll say this and then they’ll have to send them to me.”

Entertainment Tonight – The action star opened up to ET about an on-set injury that affects him to this day, and the common interest he shares with Sir Mix-a-Lot.

The promotion tour has started for “Captain America: Civil War.” You can check out Chris’ interview today with Fox 5 DC below.

EW.COM – The crew called their big scene the “Splash Page.” That’s the comic-book term for a full-spread illustration that either opens a story or marks its climax.

For Captain America: Civil War, this was the moment they filmed an epic throwdown between two teams of heroes: the forces of Chris Evans’ red, white, and blue soldier on one side, clashing against the warriors aligned with Robert Downey Jr.’s Iron Man on the other.

The 2006-07 Marvel Comics series that inspired the movie, which opens May 6, explores the same enduring question of freedom versus safety. In the Mark Millar-scripted comics, hero turned against hero as some resisted government control of their identities and abilities while others sought compliance and regulation for the greater good. Captain America stood for independence from government control, while Iron Man worked to legislate and enforce responsibility on those with “enhanced abilities.”

“In most of the movies, there’s no question who we should be siding with,” Evans says during a break between shots. “We all agree Nazis are bad, aliens from space are bad. But this movie’s the first time where you really have two points of view. There’s really no wrong answer here and it’s just a matter of who we are as men: Tony Stark and myself. Which side of the aisle do we come down on? So it’s hard for [Cap]. It becomes a question of morality and I don’t think he’s ever been so uncertain with what right and wrong is.”

In this film, the new Avengers — seen assembling at the end of Age of Ultron — take on an old enemy: Frank Grillo’s Crossbones, last spotted getting a building dropped on his skull in 2013’s Captain America: The Winter Soldier. But… the takedown goes wrong. A lot of people die. A lot of innocent ones.

After all the chaos and catastrophe witnessed in the previous films, the world finally has had enough. Government officials from around the globe assemble to enact accords that would clamp down on those with super-human skills. One man helping form the new laws is a young leader named T’Challa (Chadwick Boseman) from the fictional African nation of Wakanda, who has a secret identity himself — the long awaited Black Panther.

But Cap has seen too much corrupt authority in his (unnaturally) long life. He ain’t marching anymore.

On this already broiling July morning in Fayetteville, Georgia, Evans is sweating through his Cap mask as he shoots the Splash Page — this culmination of the conflict over the accords.

He’s standing at the end of a flat expanse of asphalt, ringed with two-story green tarps that will allow special-effects artists to transform this Pinewood Studios parking lot into a tarmac at Leipzig/Halle International Airport.
END_OF_DOCUMENT_TOKEN_TO_BE_REPLACED