Plot:
The Losers are an elite black ops team of United States Special Forces operatives, led by Clay (Jeffrey Dean Morgan) and formed by Roque (Idris Elba), Pooch (Columbus Short), Jensen (Chris Evans), and Cougar (Óscar Jaenada), who are sent to Bolivia in a search and destroy mission on a compound run by a drug lord. While painting a target for an upcoming air strike, the Losers spot slave children in the compound and try to call off the attack, but their superior, codenamed “Max” (Jason Patric), ignores their pleas.

With no other option, the Losers enter the compound, successfully rescue the children and kill the drug lord in the process. As a helicopter arrives to pick them up, Max, convinced that they know too much, orders it to be destroyed, unaware that they decided to rescue the children first. The Losers watch as a missile destroys the helicopter and kills 25 innocents. Knowing that the attack was meant to kill them, they fake their deaths and become stranded in Bolivia, determined to get revenge on the mysterious Max.

Four months later, Clay is approached by Aisha (Zoe Saldana), a mysterious woman who offers him the chance to kill Max, against whom she wants revenge. Clay accepts and Aisha arranges for the Losers to return to the United States, where they proceed to attack a convoy supposedly carrying Max, only to discover that they were tricked by Aisha into stealing a hard drive with Max’s secrets.

Unable to access the files, Jensen infiltrates the company that made the drive and steals an algorithm that allows him to crack the code, discovering that the drive contains credits for a $400 million transfer in Max’s name, which he received for selling “Snukes” – eco-friendly bombs with the potency of a nuclear warhead, but no fall-out – to international terrorists. Tracing the money flow to the Los Angeles International Port Of Entry, which the Losers deduce is Max’s base, a plan is formed to attack it and kill Max.

While studying the drive, Jensen discovers that their mission in Bolivia was a cover so Max could steal the drug lord’s money, and that Aisha is the man’s daughter, seeking to reclaim what Max stole from her. After her cover is blown, Aisha shoots Jensen and escapes. Believing that she might betray them, the Losers decide to speed up their attack on Max’s base, only to be betrayed by Roque and captured by Max and his right-hand man and chief of security, Wade (Holt McCallany).

As the Losers are lined up to be executed, Aisha returns and ambushes Max’s team. In the ensuing fight, Clay confirms that he killed Aisha’s father. Roque attempts to steal Max’s plane, loaded with his money, and tries to escape. As Roque’s jet heads down the runway, Wade takes a motorcycle and goes after him to retrieve Max’s money. Cougar shoots the motorcycle’s engine, causing Wade to be hurled into the jet’s engine and the flaming motorcycle to be hurled into the cockpit of the plane, which explodes, killing Roque.

As Jensen, Cougar and Aisha help Pooch, who has been shot in both legs by one of Max’s security guards, Clay pursues Max to a crane, where Max says that he has activated a Snuke that’ll destroy Los Angeles, and Clay will have to choose between de-activating it or killing Max. Clay chooses the former and Max escapes, but Clay affirms that he now knows what Max looks like and will soon find him.

Shortly thereafter, the Losers help Pooch reach the hospital where his pregnant wife is giving birth to their son and attend Jensen’s 8-year-old niece’s soccer game. 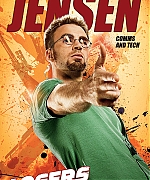 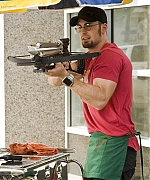 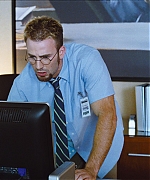 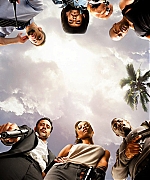