Written by Emily on March 27

Chris is featured on the cover of The Hollywood Reporter for the March 27th issue. Check out the amazing shoot in the gallery and I’ll add scans from the issue soon! 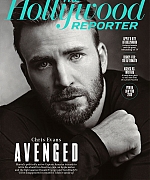 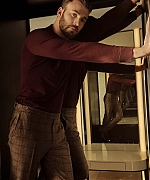 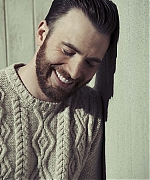 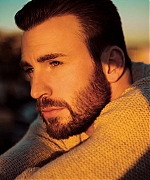 THE HOLLYWOOD REPORTER – Ahead of ‘Avengers: Endgame,’ the progressive Captain America actor and Twitter firebrand says he’s ready to retire his Marvel hero for directing gigs, a new Apple show and the fight against the “dumb s—” president: “I’d be disappointed in myself if I didn’t speak up.”

It’s a Friday afternoon in February, and the view from Chris Evans’ house in the Hollywood Hills consists mostly of fog. He bought this place for $3.2 million in 2013, back when he was two hit movies into his seven-film stint as Marvel Studios’ Captain America; there’s a Zen-ish garden inside the front gate, and a stone Buddha sits by the door. Evans banishes his dog, Dodger, to the guest room, shuts off the TV in the family room (CNN on mute), cracks a can of Modelo, and takes a seat on the couch. His arms are insane, as thick as thighs.

Evans has a movie coming out in a few months — an intimate little passion project called Avengers: Endgame (April 26). It’s the sequel to last year’s Avengers: Infinity War, which raked in $2 billion worldwide and ended with Thanos (Josh Brolin) disintegrating half of Earth’s population, including the still-bankable likes of Black Panther and Spider-Man. The moody trailers for Endgame are designed to reveal even less than usual, but it’s safe to assume that Captain America rallies Earth’s mightiest surviving heroes for a rematch with the mad god who finger-snapped their friends and loved ones into oblivion, which means this will be the first of the four Avengers movies to depict actual avenging.

Evans — who made $15 million for the past two Avengers films, up from $300,000 for his first stint as Captain America — has said he’s done playing the character after this. It’s been reported that he intends to retire from acting entirely. And yet the announcements of new work keep coming. He’s in Rian Johnson’s crowded-house murder mystery Knives Out, due in November. He’s playing the father of a teenager accused of murder in Apple’s forthcoming limited series Defending Jacob. He’s in talks to star in Antoine Fuqua’s Infinite as a presumably Chris Evans-ish guy who can recall his past lives. It’s a crowded dance card for a newly retired 37-year-old actor, and when I bring this up, Evans gets as annoyed as he’ll get all afternoon.

Read the rest of the interview at the source